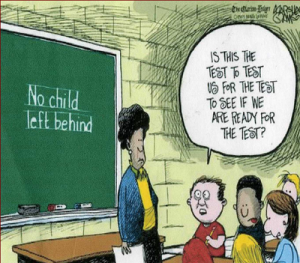 The America COMPETES Act was passed in 2007, with an emphasis on technology and science, in an effort to promote and create opportunities for educational excellence. A reauthorization of the law was enacted a new reform of the law, dubbed the “Student Success Act”.   The proposed law would ban federal involvement in determining failing schools, eliminate required federal benchmarks for academic achievement, allow federal dollars for disadvantaged or disabled students to follow the pupil sort of like a voucher, and reduce the amount of federal dollars Title I school districts receive.

It is easy to see how many in the education reform crowd would support the idea, as it creates a pathway for students to leave failing schools and pursue their education at a school of their choice. The unintended consequence of such a policy would be a shift where public and charter schools will be competing to enroll students who qualify for those funds as a means of boosting the funds they receive. So while the schools benefit from the revenue that accompanies these students, the pupil does not necessarily receive the education they deserve, rather they end up with the same academic achievement outcomes they are experiencing today.

Not only will such a policy inevitably perpetuate widening of the achievement gap, it also stands to increase the disparity in public schools serving high numbers of economically disadvantaged students. The diminished learning opportunities will further bolster the inequity in urban vs. suburban education systems, and will further accelerate the closure of inner-city public schools, replacing them with charter and federally subsidized private schools.

The bigger concern for many public school advocates is the potential for the proposed Student Success Act to be the precursor for the evisceration of public school systems, in lieu of a further shift towards charter and privately run school systems.  Most public school advocates readily acknowledge that there are good and bad public schools, just as there are good and bad charter, private, and religious schools out there. One thing we know for certain is without Title I Federal funding, public schools serving high percentages of economically disadvantaged students would be greatly harmed by any reduction in the funding they receive. While many have been unsuccessful in their mission of providing equitable learning opportunities for their students, to withdraw funding at this point would only further turn a bad situation worse.

A better approach today would be to maintain Title I Federal funding based on the present formula, while implementing accountability measures that are meaningful and effective. Federal accountability guidelines should focus on improving early childhood education, reduce the emphasis on testing, tie teacher performance pay to innovative practices linked to student success, and create data share appendages to foster identification and sharing of best practices between the public and private educational complex.